In this post I want to document my success in treating a Demodex infestation with frequencies.

Originally I was introduced to Spooky 2 in 2013 through David Bourke’s website while I was searching for information on how to get rid of a Demodex mite infestation of my face. At that time I bought the original UDB generator and ran various Demodex frequencies in remote mode for about a month. It did not seem to have any effect at that time and I pursued other methods to deal with the infestation.

In 2016 I still had not solved that problem and had another look at Spooky. Encouraged by all the progress the Spooky project had made I bought the new XM-generator together with Spooky Boost and Spooky Remote. I also bought a subscription for Dr. Jeff Sutherlands Frequency Foundation website, because he is highly regraded in the Rife community and has developed an extensive frequency set to directly kill Demodex mites, which he had refined for several years. This time I could clearly feel that the remote treatment had some effect, because killing the demodex mites in my case always leads to a die off reaction in the form of a temporary bacterial infection of the pores of the affected parts of the skin (pimples). There is research showing that demodex mites, just like humans, have their own individual microbiota and that the microbiota of the mites of the people who have problems with demodex mites differs from the microbiota of the mites of people who have no such problems (See: https://www.ncbi.nlm.nih.gov/pubmed/24768927). This plays well along what Royal Rife and Hulda Clark have been saying about how parasites carry around their own pathogens which are released when they get killed.

So I clearly saw some effect of the remote treatment, however after running the frequencies remotely for several months and trying lots of variations (black remote, white remote, different waveforms, added background frequency) my condition was better, but still not fully resolved.

At this point I got really tired of this problem, which I had suffered from for so many years already, and decided to buy the Spooky Central system with the plasma tube. I do have a microscope and I regularly took sebum samples to monitor the progress of the treatment (Demodex mites can be found in sebum extracted from the affected pores). After using Spooky remote for several months I still found living demodex mites in my sebum samples every time I checked. So the first thing I did after I received my new Spooky Central system was to use it to apply frequencies to those sebum samples with living demodex mites in them while simultaneously watching throught the microscope to see what effect the frequencies do have on the living mites. I placed the plasma tube around 10 cm away from the sebum samples.

Most of the parasite frequency sets of Dr. Jeff Sutherland consist of not just one kill frequency, but up to 20 frequencies which are designed to kill all lifecycle stages of a parasite (eggs, larvae, nymph, adult) and disrupt various proteins that are essential for the parasites survival. Furthermore he publishes frequency sets for various strains of a parasite, as genetic mutations lead to different strains of the same parasites (same like some strains of the same kind of bacteria can be susceptible and others resistant to a certain antibiotic).

So running all the frequencies I had available with Spooky Central and the plasma tube, applying each for at least 3 minutes, took me a long time. I am very excited to announce that I was consistently able to kill the mites that I was observing under the microscope. To this day I was not able to identify which frequency exactly killed the mites, but running the whole set for one to two hours killed all the mites I have tested under the microscope. 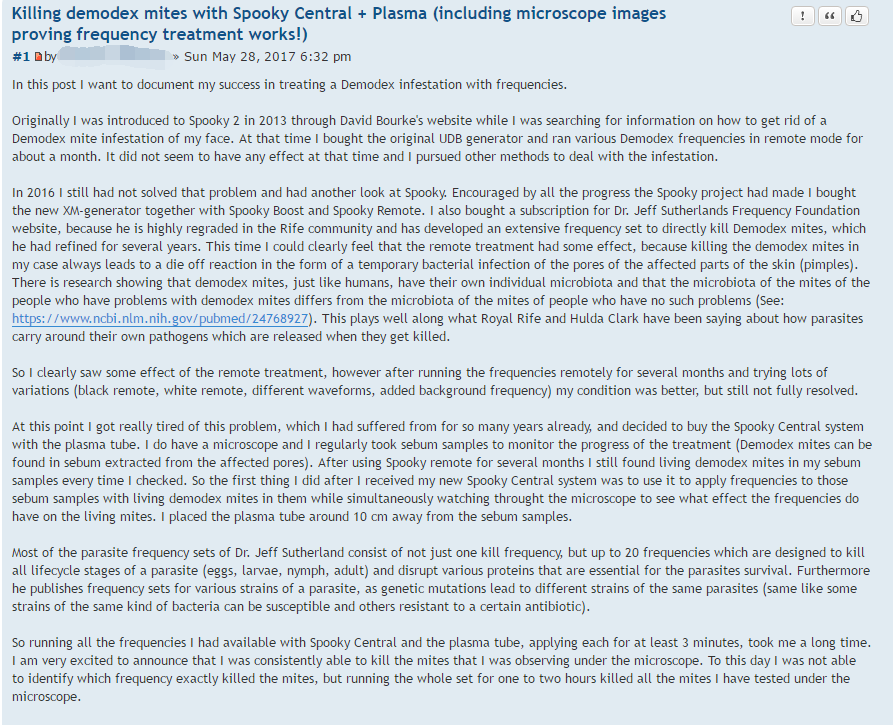 2 thoughts on “I am very excited to announce that I was consistently able to kill the mites that I was observing under the microscope.”