I did extensive testing on the combination of the HC and KHZ section of the program list. HC means Hulda Clark. KHZ is the high-frequency set of HC. The setup is the combination of a generator, in this case the GX, connected with the cinch cable to the scalar. When the distance between the antennas is around 2 m, the tuning is around 5.8 MHz. I tested a lot of patients with infections on my Hunter device and double-checked them on the Bicom machine with electroacupuncture. When the identification of the bacteria is identical on both methods I take the diagnosis for done.

Boot laptop, Spooky software, and Scalar. Tune scalar and select the correct preset. Next, I simply type the name of the bacteria in the program, deselect all sections of the database and select only HC, KHZ and EDTF. A shortlist of programs will make selection more simple.

I saw that on all patients the infections drastically disappeared, bacteria, viruses, and fungi. Inclusive the bacteria that are resistant against antibiotics. The next story is a typical experience:

A friend of us works in the hospital for many years as a radiotherapy assistant at the oncology department. She suddenly got seizures and fainted. After coming back to conscience she got fever attacks that were persistent. Her chest was painful as if she was pinched on the ribs. They took her in a research test and found 2 bacteria types: MRSA and klebsiella. They put her on antibiotics for 3 weeks. In the 3rd week, she got a nasty swollen foot plus a red line on a blood vessel up from her foot to her leg. Her doctor did draw a line around the infection to see if it will become worse or better. It became worse. The foot became extremely painful. So it was a near sepsis case. After a phone call I invited her to come. Her husband dropped her off at my door because walking more than 10 m was not possible. She came in, stumbling on one foot because the other foot was too painful. After 10 minutes the test was positive on staphylococcus aureus and streptococcus pyogenes. She asked me if it was necessary to cancel her planned holidays the next day. I said her to wait after the treatment to decide to cancel or not to cancel.

After 45 minutes with the magnet coil of the Bicom placed on her foot, she felt some relief. But her feverish feelings and chest and foot pain remained active. So I decided to start the scalar and run the 2 bacterial programs. Both programs were listed as 30 minutes. I reduced dwell time to 0.5 to limit the session to 30 minutes and click start. She felt sensations in legs and chest. After 30 minutes, she said that all fever and pain did leave her body. No trace of pain in her foot. Even the color on her foot changed from hot red to slightly pink. She decided to go on planned holidays for 2 weeks next morning. She went out of the door walking on both feet. After returning I asked her how did the holiday go. Nothing wrong she said. All illnesses gone. Only a small dot was visible on her foot where the infection had been active. Even the small scar disappeared after the next session.

So, John and the other team members, thanks for this powerful weapon against all kinds of infections. 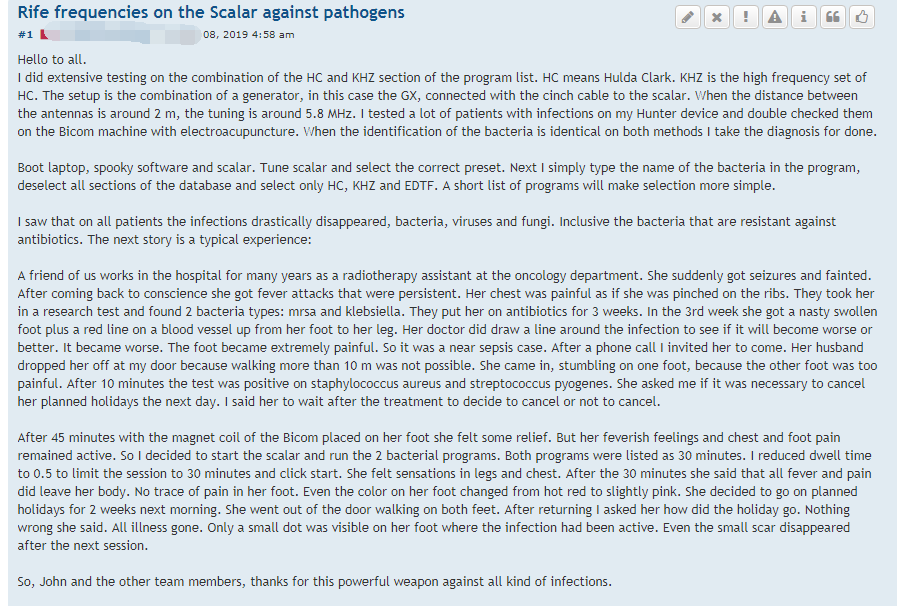