Positive feedback.
I am new to Spooky2. I have not explored much but I wanted to share my story.
I am a migrainer. I will try to keep a long story short.
Several years ago I was on an elk hunt. It was a Thursday. I didn’t get one that day but I did help dress and pack one out. Sunday I was in the emergency room. I had a temp of 105, a rash over my entire body and extreme exhaustion. I ended up being in the hospital 3+weeks. They told my husband to make funeral arrangements. My organs were shutting down. They couldn’t give antibiotics as that made me worse. The only thing they could do was hydrate me via IV’s. I lived but that was the beginning of migraines. I searched, did diets, 3 surgeries all to try to get them under control. I came across a woman who left nursing to operate her “machine”. She was able to stop the migraines. She talked of nocardia and prions. One day it dawned on me that she was using frequencies. I called a friend that had used frequencies and was referred to spooky2. Now, I dont pay her $120 a visit to keep my migraines under control. I use Spooky2!
I can generally tell when one is going to hit so I run a program I put together in presets.
For those that need help I am posting my program.
Prions (XTRA)
Nocardia Asterolds (VEGA)
Nocardia Infections (ETDF)
Headaches (XTRA)
Spooky2 has changed my life! 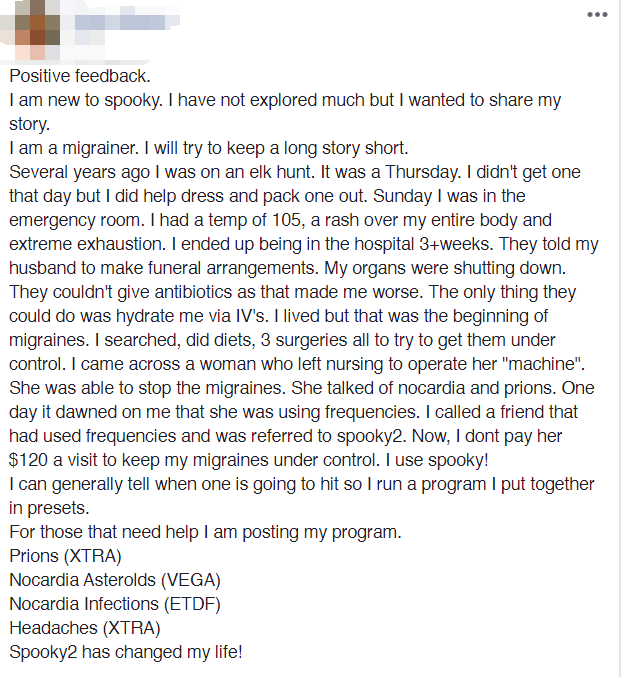