Hi Spooky family! I wanted to share an experience I had helping a friend. She hasn’t been able to drive at night for 10 years because her eye sight was so bad, and it had been getting worse. She’s also only 30 years old. I told her about my rife machine and a little about frequencies, she was pretty skeptical but willing to give it a try. She had a specific diagnosed condition that wasn’t listed in the presets so I just ran the eyesight to improve – JW preset. I had it running for 56 hours when she called me saying that she was feeling overly emotional and wondered if it was related to the frequencies. I told her I didn’t know but we could stop the machine, so we did. She then called me later that night as she was in a friend’s car heading home ecstatic because she was able to read road signs and license plate numbers for the first time in 10 years! She was so excited because she had embraced the possibility that she would eventually not be able to drive at all. Thanks so much John and the entire Spooky2 team for making this technology available!! 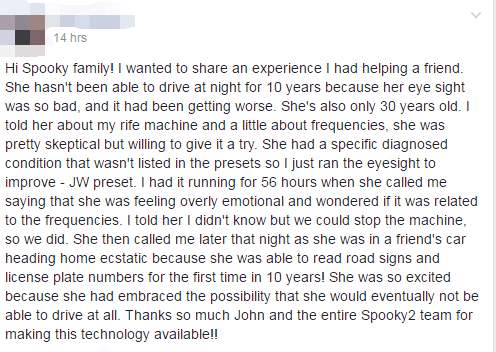