About 2-3 months ago my dear friend Ron phoned me and said that he was having various health issues. Ron lives in the state of New York which is almost 1,000 miles from me here in Florida. I explained to Ron that I can dedicate one Spooky 2 GX generator, two Spooky 2 Boosts and two fingernail remotes running 24/7 for him and he agreed.

When I asked Ron to mail/ship me his finger and/or toenails I did not expect him to cut all of his finger and toenails and ship them to me, which he did. After I received the package I cleaned the 12-15 toe and fingernails with hydrogen peroxide and soap and water.

At first, I only put a few of Ron’s finger/toenails into the two Spooky Remotes. The rest of the nails I taped onto the back of the picture that Ron sent me. I then placed that picture between the two Spooky 2 Scalar units. But after a few days, the Scalar picture thing didn’t feel right to me.

So I carefully removed all his nails from the back of his picture. I took three pieces of tape to fit into the remote to make one large section of tape. I then put several of Ron’s nails onto the sticky part of the tape. I made another three-layer side to go over the first layer. Both remotes now have 10-15 finger and toenails secured within them.

First, and most importantly, I ran the Remote Terrain Protocol 24/7 (day & night), running each protocol for about 12 hours per remote. After that, I ran frequencies 24/7 concerning his serious health issues for heart, liver and kidneys.

About one week into all this I took a gold plated wired pyramid and hung the picture of Ron into the centre of the pyramid. I got the pyramid from Chris Kehler when I bought his dowsing course.

I then placed the pyramid on top of the GX generator, where the pyramid is now totally covering the two Spooky 2 Remotes. Based on my own experiences with pyramids and more, I believe that this has increased the healing frequencies and much more for Ron. Of course, I cannot scientifically prove this to anyone so go do your own research. Fact is, for us, it’s working so I’ll keep doing it, lol. I’ll try to post a picture here. 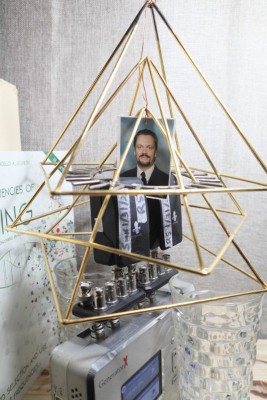 About one month later, Ron told me that his doctor said that the number for his kidney disease went from a 5 to a 4, which is really good. Or maybe it was from a 4 to a 5? Anyways, his doctor doesn’t understand how this is happening but says to keep doing it, lol. I will continue dedicating my remote frequency work to Ron for as long as I can.