I am a care giver to my 98 year old father. In May of 2015 I had come down with a terrible rash on the top of my hands and arms. That same month my sister died of cancer of the uterus. Before she died she had a homemade zapper built from the specifications of Dr. Hulda Clark. Her and I both could barely hold the hand cylinders. It was just too powerful for us.

In October of 2015 my hands were starting to get really bad. They were crusted and broken open and started to look like claws. (I didn’t know it at the time but it was scabies. I do not go to doctors so this knowledge was after the fact.) Then I remembered the homemade zapper. I purchased one and I could barely hold onto the hand cylinders. My father at the time was 94 and not on any medications so he was able to help me with the daily tasks. However he was very tired all the time. I knew that I needed more then just a zapper so I started looking for a more enhance machine for us.

A Yahoo search brought me to a machine that used DNA entanglement and many more frequencies then I could ever image. It was called Spooky2. I bought my first Spooky2 Essential Kit January 2, 2016. As soon as I received the generator and tried it, I knew that that it worked but also that I needed more. I bought two more on January 13, 2016. I then start the Lyme and Morgellons protocol. They were really working well and helping me with my problems.

The biofeedbacks were helping me get better. My then 94 year old father was also doing the protocols and the biofeedback. I then purchased more units that August and September to get deeper into the issues and have more on detox. They were working well for us but I still had more issues that needed to be addressed. On January 16th on 2018 I could afford to get the Spooky2 Central and Phanotube. Wow! I didn’t know what I was missing. This has really helped to speed up my recovery. I also purchased more XM generators as I could afford them.

I now have 24 generators and the Spooky Central and each day my father and I are healing and gaining new energy. When I can, I would like to get the new generator X so that my father and I can speed up our feedbacks.

We do a feedback every 4 days and use Spooky Central Plasma everyday. I am almost 100 percent and my father who is now 98 is still not on any medications and can now walk a mile a day! We are truly blessed. We cannot stress how important Spooky2 and the team has been in helping us to regain our health. Thank you all for your hard work! 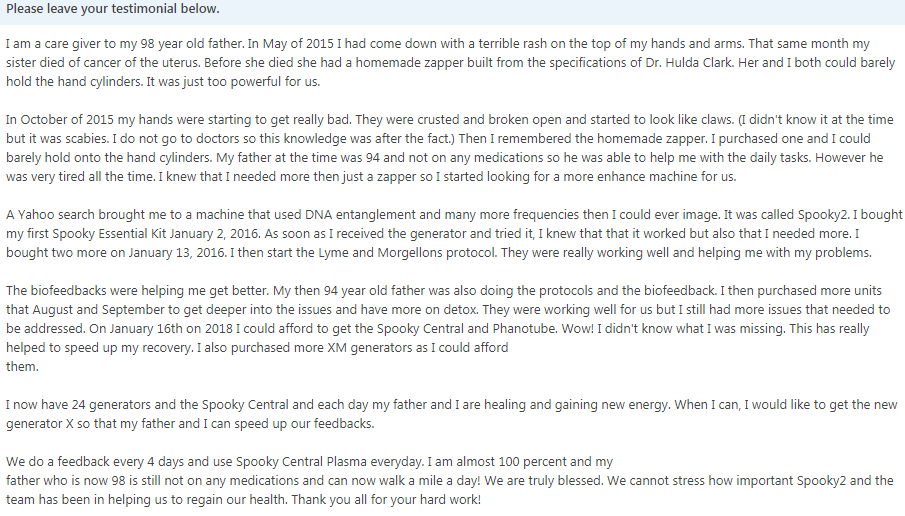