A Spooky2 win!!! I was diagnosed 3 yrs ago with Stage IV breast cancer that had metastasized all throughout my bones. I had been treating it with alternative protocols for about a year (which kept the cancer stable with no growth) when I bought my Spooky2 equipment to add to my arsenal of treatments in the hope that it would eradicate the cancer, not just keep it stable. I followed the cancer protocol and saw a small beginning shrinking of the cancer in some areas. However, it was also causing very frequent migraines, about one per week, that were very debilitating (my experience, not necessarily other’s experiences….just how my body reacted). After months of this, I finally had to stop the cancer protocol and give my body a much needed rest. I continued to run cancer frequencies by remote, just not on my plasma long tube. The migraines stopped thankfully. However, remote was not enough and I had three new “hot spots” of cancer light up on scans three months ago…..one on my left femur and on two different ribs….. along with intermittent pain in those areas. I tweaked one of my alternative treatments right after those scans three months ago and then about 6 wks ago I also brought out my plasma tube again. I was leary of trying the cancer protocol again bcuz of my own personal experience so I prayed for direction and felt led to try something different this time. About two weeks ago I noticed that the pain in those three “hot spot” areas had pretty much gone away. Just had scans again to recheck and none of those three “hot spots” lit up on the scans this time, meaning there was no active cancer there anymore! Amazing!!! The reason I know that my plasma tube/Spooky2 was effective on the cancer spots is bcuz the very first night of using it I had the tube on and laying across my lap and within a minute or so I started feeling little electrical “bites” or twinges in my femur where that cancer spot was. I found that fascinating! It didn’t last long, but it was unmistakable and these latest scans attest to it.
What I ran on my plasma long tube every other night: presets>cancer>plasma>cancer (bacillus licheniformis)(P)-JW (read the notes on the right side…very interesting!). I also ran detox programs on remote on two different generators, one that I have going 24/7 anyway and the other on remote during the in between times I’m not using that generator overnight for my plasma, along with drinking a ton of water. And thankfully not one migraine to boot!!! Thank you, Spooky2!!! 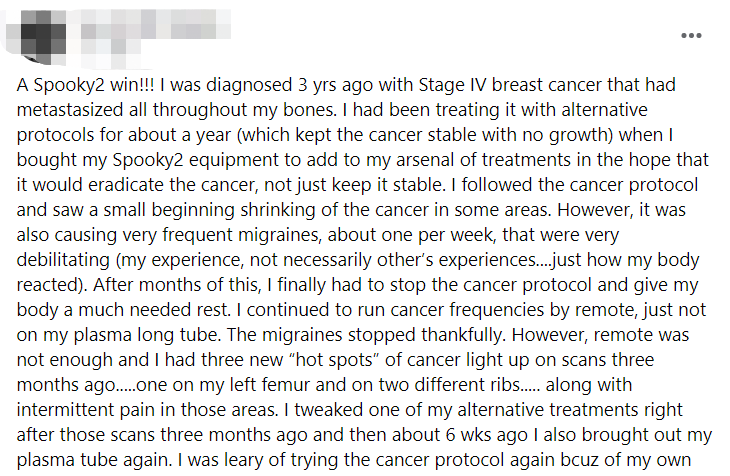