I’ve got both. I got the genx first which is a learning curve it’s quite complicated but there’s a lot of help and you’ll be up and running in no time. I bought scalar and use it on its own and with genx it’s hard to say what’s better or what to buy first but I think if I had the choice again I’d probably buy scalar first and link it up with the frequencies using my speaker then invest in genx later. But that’s only my opinion and as I have both I use both. Scalar is simpler to use. I also have fibromyalgia arthritis and depression because of the pain. Scalar has wiped out depression! Pain is minimal if at all. 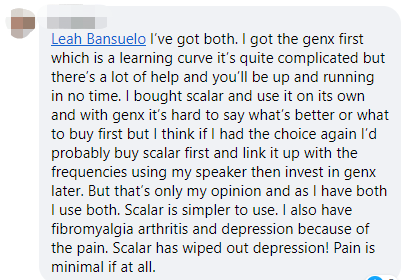